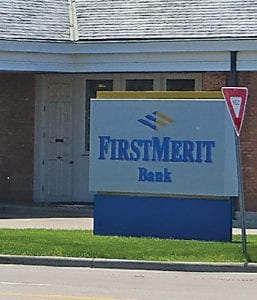 FLINT TWP. — Citizens Bank has served the Flint-area since 1871. But the trusted old name was officially retired last week when its new owner, FirstMerit Corporationå of Akron, Ohio, put up new signs.

Sign removal and installation crews were spotted on site last week at the Citizens branches on Miller, Linden and Beecher roads in the township.

Citizens’ familiar deep red sign with its red and white striped ball emblem came down and in its place went First Merit’s blue and yellow on white signage.

The acquisition was announced in September 2012 and consummated in April but the sign change is part of an ongoing full integration process expected to be completed by fall.

“We are excited to introduce the FirstMerit brand on branch signage in communities across Michigan and Wisconsin,” said FirstMerit president and CEO Paul Greig, in a press release.

“Throughout this time of change, our teams continue to provide customers with the superior level of service they’ve come to expect, and that is our top priority,” he said.

In addition to the sign change, the company also announced redesign of Citizens landmark weather ball on the roof of the main branch in downtown Flint that has changed colors to signal changes in weather since it was first lit up in August 1956.

With the acquisition of Citizens, FirstMerit, founded in 1845, became the sixth largest bank headquartered in the Midwest. Now serving Michigan, Ohio, Wisconsin, Illinois and Pennsylvania, the company employs more than 5,000 people, at 400 branches and operates 440 ATM locations.

First Merit has assets of about $24.5 billion.