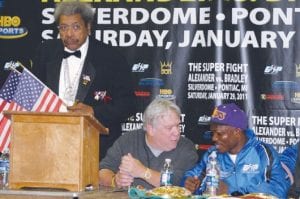 PONTIAC — Some call boxing, “The Sweet Science”, because of the complexities that stem from such a simple quest, making a punch in the face as much about the journey as it is the destination.

Last Saturday that quandry helped put Oakland County’s Pontiac Silverdome back on the map with a 140 lb. unification title bout featuring WBO junior welterweight champ Tim ‘Desert Storm’ Bradley against WBC super lightweight title holder Devon Alexander ‘The Great’. While the main event was broadcast live by HBO and scheduled for 12 rounds, the fight was a backand forth affair highlighted by the style anomalies that arise when a southpaw faces a right hander, only to get called in the 10th round when Alexander couldn’t continue because of accidental headbutts.

That meant judges had to put one of these two undefeated fighter’s careerlong win streaks to rest forever based on the score up to that point, and with Bradley ahead on all three score cards Alexander must have breathed a silent sigh of relief for not trying to work through his vision issues. As the shorter man, Bradley kept the distance between he and Alexander close with an aggressive approach that bordered on stalking, not allowing ‘The Great” to put his reach advantage to use. Alexander wasn’t without his charms though, returning Bradley’s hard-hitting flurries with well-placed hooks to the body and head. 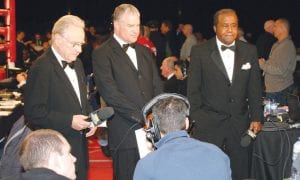 That came after ‘The Great’ started out the fight by circling Bradley, while trying to use a strong jab to control the distance, an approach that forced Alexander to slowly but surely change his game plan as the rounds wore on and the damage just kept building. While the fight was contentious throughout, afterwards Bradley and his heavily battered left eye were about as gracious as you could expect from someone that just came out of the main event of a Don King/Gary Shaw co-promoted fight-card, raising his record to 27-0 with 11 knockouts while referring to Alexander (21-1, 13 KO’s) as a future world champion.

The three-hour untelevised undercard turned out to be action packed last Saturday at the Silverdome, as well, an extravaganza of strikes highlighted by Detroit Kronk Gym’s undefeated junior welterweight Vernon Paris edging out a unanimous decision over Emanuel Augustus in the final match of his career. With each passing round Paris and Augustus exchanged just a little more banter, and while Paris seemed to be getting the better of the exchanges, Augustus turned a boxing match into a brawl with bullying tactics and two warnings for elbowing. Augustus then upped the ante a little more by coming out of his corner early for the sixth round and displaying his aggression to the beat of the between-round music.

To his credit Paris avoided a lateround fade by relying on his strengths and standing firm in the face of Augustus’ obvious motivations, pulling out the win even though the crowd seemed to start turning on him in favor of his hard-charging, underdog opponent. While the Silverdome seated over 80,000 when the Lion’s played their, last Saturday the new ownership chose to break out the curtain used in the 1980’s for Piston’s games to section off a 9,000 seat area for this event, even reopening the Main Event Restaurant for the occasion.

On a separate note, Silverdome officials are still planning to house a professional soccer team in the not-so-distant future once their $8 million in renovations are complete. This includes constructing a floor that will separate the third level of the venue from the first and second, allowing other events to take place in the bottom half of the building while soccer flourishes above. Ownership even wants to add a retractable roof so the natural grass of the soccer field can have access to natural sunlight and plan to bring the currently defunct Michigan State Fair back to life.