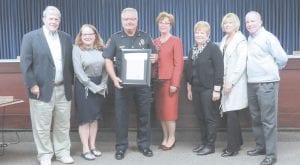 Chief Sippert (holding a proclamation) and the Flint Township Board

FLINT TWP. — Longtime Flint Township police chief, George Sippert, gave his last report to the Board of Trustees on Monday night to a full house.

After 32 years of service to the township, Sippert, who has served as the chief of police since 2004, will officially retire on May 25.

Flint Township Supervisor Karyn Miller read and presented a framed resolution from the full township board honoring Sippert’s exceptional service, experience and professionalism for his 32 year career with the township.

Sippert read a letter for the record, that he sent to the board dated April 9, announc- ing his retirement. 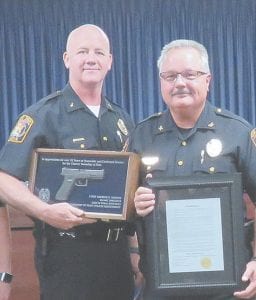 “Chief Sippert certainly leaves a lasting legacy at the Flint Township Police Department and will be missed by all of those who had the opportunity to work with him,” said Miller in a press release, Tuesday.

Lt. Kevin Salter was promoted to Chief of Police effective May 22. He is a 1993 graduate of Ferris State University where he earned his Bachelors of Science degree in Criminal Justice.

Salter is a graduate of Northwestern University Center for Public Safety, School of Police Staff and Command, Class #376.

He said he is excited for the opportunities that lie ahead and looks forward to the future as the new Chief of Police for the Flint Township Police Department.