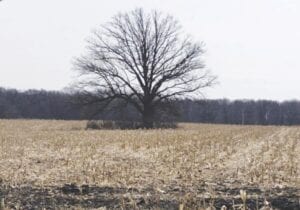 The old oak tree on Perry Road will be preserved under the provisions of Atlas Township’s site plan review ordinance. Photo by Lania Rocha

ATLAS TWP. — A giant, ancient oak tree that reigns over about 80 acres of mostly cornfield on Perry Road will be spared from the bulldozer, no matter what the future holds for the property.

“I believe that tree would add character and beauty to whatever goes there,” said Atlas Township Planning Commission Jay Tenbrink. “It has value.”

Commissioners briefly discussed the fate of the tree at a recent meeting.

The protection and preservation of natural woodlands has been a topic of debate and discussion for decades. The subject garnered considerable attention in the latter part of the 20th century, when many old-growth groves were clear cut to make way for subdivisions and other developments. Builders, at that time, argued that it was more efficient and economical to reforest than to work around existing foliage.

Even today, the debate continues in many communities. In neighboring Grand Blanc Township, the board of trustees and planning commission have spent months working on updates to the woodlands preservation ordinance. It’s a delicate balancing act between the twin pillars of natural resource preservation and respect for the rights of property owners.

In Atlas Township, the ordinance that will protect the old oak was adopted in 1997, and amended four times from 2006 to 2018. It requires developers to present site plans that preserve trees that measure eight inches in caliper at a point four and a half feet above the ground.

“Generally, people like trees and forests,” he said. “They can be very passionate about it.”

As for the rest of the Perry Road property, Tenbrink said he is not aware of anything new in the works at this time.

A group of investors had previously sought to build an entertainment complex there with cricket and baseball fields, zip lines and other attractions, but backlash from neighbors jettisoned that plan.

Township officials have said there’s been talk of a subdivision or solar farm, but no applications have been filed with the township.