Six Cavs wrestle on to regionals 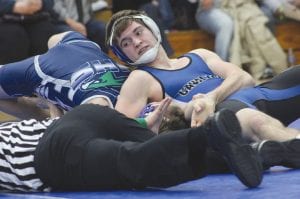 Jake Weissend won the Div. 1 district title at 145 pounds, and Malik Dawkins edged teammate Wes Cummings for the 112 crown to lead the Cavaliers into this Saturday’s regional tourney, also at Davison. Aaron Dupree (119), Darien Vaughn (125) and Tae Pendleton (171) also advanced to the next level by earning one of the top four places in the district.

“After taking second last year, I really want to win it this year,” Weissend said after his 200th victory Feb. 1. “I’ve just been extremely focused the past few months here.”

Weissend, ranked second in the state all season, dominated his first two opponents, with a 46-second pin and 15-0 technical fall. He beat ninthranked Patrick Rooker of Davison in the final, 4-1.

Dawkins, a freshman, took the 112 crown with an 8-2 victory over his senior teammate, Cummings. Dawkins won an 11-1 major decision and had a 1:25 fall to reach the final, while Cummings had a 1:18 pin and a 5-0 decision. The runner-up spot gave Cummings his second regional berth in three years.

Pendleton also placed second. The junior won a 24-9 technical fall in his first match and beat Ryan Thick of Davison, 3-2, in the semifinals before losing the final, 10-0, to sixth-ranked Knute Hoffman of Midland.

Dupree was third, losing only to champion and top-ranked Justin Oliver of Davison. The Carman-Ainsworth junior beat Flushing’s Devonte Smith twice in his other two bouts, winning, 5-1, in his opener and then pinning Smith in 3:22 in the third-place final.

Vaughn, another freshman, was fourth at 125. He had a fall in 5:52 and a 17-2 technical fall before losing the thirdplace final to Bay City Central’s Collin Richard.

Carman-Ainsworth dropped a heartpounding, 33-30 decision to Saginaw Heritage in the team district Feb. 8 at home. The Cavs got pins from Weissend and Lorenzo Redmond to take a 30-27 lead, but lost a hardfought, 10-6 decision at 160 and another nail-biter, 12-8, at 171 to end it. Heritage went on to beat Flushing, 47- 27, for the district title.