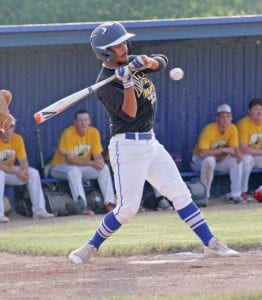 FLINT — Kevin Thompson of Lapeer drove in the tying run and scored the winning run to cap a six-run rally in the bottom of the ninth inning and give the Black team a 10-9 victory over the Gold in the Bruin Club All-Star Baseball Game on Monday night at Whaley Park.

Thompson’s heroics earned him the Most Valuable Player award for the Black, but Lapeer teammate Hunter Smith also had a key hit in the rally. Smith was down to his last strike with two outs and the bases loaded, when he slapped a slow chopper to third base that went for an infield hit and also forced a throwing error that cleared the bases and pulled the Black team to within 9-8.

Smith wound up on second base and Thompson singled him home to tie it, then stole second base to put himself in scoring position. New Lothrop’s Quinten Taylor singled home Thompson to end the game.

Imlay City’s Jake Lesniak was the Gold team’s MVP after his two-run triple broke a 4-4 tie and triggered a five-run rally that gave the Gold a 9-4 lead in the top of the eighth. It was Lesniak’s second triple of the game, this one a slicing drive into the right-field corner that easily scored runners from second and third. He scored moments later as the Gold took its first lead of the game after trailing 4-1.

North Branch graduate Mac McGough also had at least two hits and a stolen base for the Black team, which out-hit the Gold 12-7. Lapeer’s Nick Hires had a hit to put runners at first and second for the Black in the bottom of the eighth, but Swartz Creek’s Zach Rigdon went to his knees to catch a sinking line drive in right field and kill the rally.

Fenton’s John Leske pitched a 1-2-3 ninth for the Black to get the win and earn the pitching MVP award for the game.