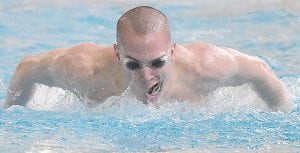 Carman-Ainsworth grad Erick Skaff works his way across the pool for Hope College.

HOLLAND — During his days competing for the Carman-Ainsworth varsity swim and dive team, Erick Skaff dominated the rest of the Big Nine like few before him ever had. Now that the Cavaliers have moved on to become members of the Saginaw Valley League, those accomplishments may feel a little bit dated to everyone but Skaff, who parlayed those prep performances into a spot on the men’s swim team at Hope College.

“Erick has an excellent work ethic and a great attitude,” said Hope men’s and women’s swimming coach John Patnott. “We are working on his race strategy. If he can apply what he does in practice, his times will improve significantly.”

With the Flying Dutchmen competing in the Michigan Intercollegiate Athletic Association, results for Skaff during his sophomore season include finishing 19th in the 500 free with a preliminary time of 5:06.44 at the Jenison Aquatics Center during the 2013 MIAA Championships Feb. 13- 16. Skaff also finished 15th in the 1650 free and 200 fly by clocking in at 17:56.58 and 2:08.26, respectively, at that meet. Hope finished third in the six-team field with a score of 527.5, behind Kalamazoo College with 895.5, and Calvin College at 666, but ahead of Albion’s 464.5. Olivet placed fifth with 367 and Alma posted a score of 246.5.

“Erick will be a junior next year and, although not a captain, will still take on some leadership role as an upperclassman.

His attitude will help the freshmen adjust to the program,” Patnott said. “In a sport where everything in practice is hard work, attitude is one of the keys to success.”

“Erick is an excellent student, he has one of the highest GPA’s on the team,” said Patnott. “As a person, he is upbeat and considerate of his teammates. Can’t ask more from him.”

When asked how Skaff became a part of the Hope men’s swim team, Patnott felt there were two very distinct reasons why the Genesee County product chose to become a Flying Dutchman. The coach offered no insight as to which of these two factors carried the greatest weight, though.

“His visit to Hope, as well as his uncle works at Hope,” Patnott said.