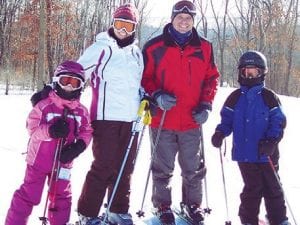 Families are adopting skiing and snowboarding as a way to stay connected.

NATIONWIDE — At Boston Mills/Brandywine ski areas in Ohio and at other ski areas across Midwest, the story is the same: Thousands of parents return to skiing each year and introduce their young children to the sport they fell in love with as kids themselves.

“We’ll get calls from parents who say, ‘The snow has been falling and I’ve been thinking about what fun I had as a kid skiing, and now I want to get my child involved,'” says Kim Laubenthal of Boston Mills/Brandywine. “These adults got out of the sport for a while because of getting married, buying a house and having kids-they don’t have much time to do anything. But when their children get to be three or four, they want their kids to learn to ski and it’s something the entire family can do together.”

At Nub’s Nob in Michigan, Scott Stillings says parents “are coming back to the game because they see the relative value of skiing and snowboarding. They’re doing the math and seeing that, for cost-effective family fun and recreation, skiing is still a deal. They go to the swaps and buy gently used equipment and then they buy a family season pass.”

Unlike organized youth sports, “parents aren’t just watching from the sidelines,” says Vicki Bauman from Wisconsin’s Granite Peak. “The entire family participates together when they ski and snowboard. Family time is so precious and priceless, and you make memories that you’ll remember forever.”

The increasing popularity of Granite Peak’s all-inclusive weekend “Family Festivals” is proof to Bauman that “families are skiing together more and more.” The ski area now does three Family Festival weekends throughout the season, up from one just a few years ago, and they sell out early. Many other Midwest areas, including Crystal Mountain in Michigan, cater to families with special programs. For Crystal’s efforts, including special child care and ski school programs, scavenger hunts, family movie and game nights, an ice skating rink and horse-drawn surrey rides, Parents Magazine rated Crystal one of the top 10 family ski resorts in the country.

To meet demand, Midwest ski areas are teaching children how to ski at a young age. At Michigan’s Apple Mountain, the “Apple Seeds” program for 4- to 6-year-olds was created a decade ago because of demand from parents. At Hyland Ski & Snowboard Area in Minnesota, its popular “Hot Cocoa Club” for 3- and 4-year-olds sells out immediately, despite adding extra sessions to keep up with the demand. And at Boston Mills/Brandywine in Ohio, the “Tiny Tots” program for 3- and 4-year-olds continues to grow in popularity and sells out by mid-October each season. “It’s mostly word of mouth,” says Kim Laubenthal from Boston Mills/Brandywine. “Parents will see each other at daycare and say, ‘You have to do this program.'”

Midwest areas are also catering especially to the parents who are getting back into the sport with their children. At Hyland in Minnesota, adult classes start a few minutes after the children’s lessons (and end a few minutes earlier) so that parents can drop off their child in a lesson and then take a lesson themselves.

In addition to the joy of sliding on snow with their children, parents who are getting back into skiing after a prolonged absence have discovered an added bonus-new technology has made the sport easier than ever. “We’ll see parents haul out these long, straight, skinny skis,” says Laubenthal. “We’ll say, ‘Why don’t you try some of these nice new shaped skis that are shorter and wider and easier to turn.’ A lot of parents will then say they’re amazed at how easy the new skis are to turn and maneuver.”

Echoes Scott Stillings from Nub’s Nob: “These parents come in and rent equipment so they can ski with their kids, and they’re blown away by how much better the skis are than from 15 years ago when they last skied.”