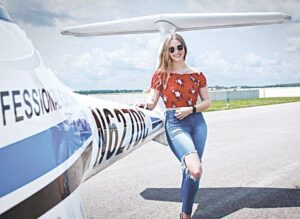 Sydney Dyer with one of the planes she trained in.

DAVISON — “I’d rather be flying” is a statement that sums up 17-year-old Sydney Dyer’s outlook on life after earning her private pilot’s license last month.

Sydney is the first Davison High School student to go through the new aviation class at the Genesee Career Institute, receiving her private pilot’s license and now wrapping up course work to obtain her drone piloting license through the second year of the class.

Sydney said she was in the second group of students from around Genesee County to go through the program, which is a partnership between GCI and Crosswinds Aviation.

The first year of the program gives students the knowledge needed for a pilot’s ground license, while the second year focuses on obtaining a drone license.

During the program, students spend three hours daily at the class, which is held in a hangar at Bishop International Airport. 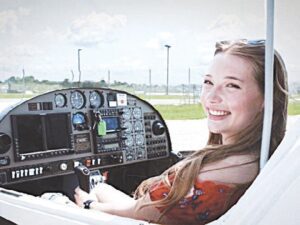 Sydney Dyer, 17, a Davison High School senior, behind the wheel of a training plane at Bishop International Airport in Flint Township. Sydney recently earned her private pilot’s license through a program at Genesee Career Institute.

“Last year was a lot of new knowledge on everything relating to aviation,” said Sydney. “This year we’re focusing more on fine details and getting our drone license.”

She received her private pilot’s license Sept. 26, passing the test with just 52 hours of flight time under her belt.

Diana Allard, executive director of career and technical education for the Genesee Career Institute, said the program started after GCI was approached by the Greater Flint Pilot’s Association regarding a national shortage of pilots.

“They asked if we would look at what other high school programs there were for aviation in the state and wondered if we could do that for our community,” said Allard. “We discussed what would a program look like and we knew this was a high wage, high demand profession.”

GCI entered into an agreement with the director at Bishop International Airport to house the program at a hangar on airport property, said Allard.

Crosswinds Aviation, who taught a similar program at the Wilson Talent Center in Howell, already had instructors to teach the program and leases space at Bishop, so they came into the partnership to handle the flight instruction.

GCI then put training simulators in, with money from the Mott Foundation, to start the program, said Allard.

The program started with 18-20 kids the first year, she said. In all, there are about 30 spots available each year, two for each school district in the Genesee Intermediate School District. They worked through the curriculum and got things up and running, just in time for COVID-19 to come along in the second year.

Once they were able to get through the year of the shutdown, the program has gotten back on track this year offering something new to students in Genesee County that was never previously available. Students are not only able to obtain a private pilot’s license, they can also earn a drone piloting license and just by being housed at the airport, can see many other jobs that are out there in the aviation industry.

“This opens up an area we haven’t been able to offer kids in this community before,” said Allard. “With the rise of different kinds of technology, such as drones, some of these students might end up working for insurance agencies. These are very sought-after individuals.”

Some may decide to pursue a career on the mechanical side of aviation, some could go on to join the U.S. Air Force to become a pilot or pursue corporate or commercial piloting careers, said Allard.

Drone pilots are also in high demand because of risk management insurance programs where drones are used to evaluate fire damage and other environments hazardous for adjustors, she said.

Sydney said she was intrigued by the idea of studying aviation, but all it took was scheduling a free, 15-minute flight thought an organization called Young Eagles for her to realize that’s what she wanted to do.

She said the organization is for anyone under the age of 18, they will give students a free 15-minute flight in a small plane and see if they like it or not.

“I made sure I got into the program, I talked to my counselors as much as I could, even through COVID-19,” she said. “I just found out everything I could about the program.”

Sydney describes the class as “absolutely amazing”, adding she loved taking the class and learning all she could about aviation.

Even her parents, Mike and Tiffany Dyer, said they had never seen their daughter so passionate about learning and studying.

Tiffany said the classes have also inspired Sydney to want to be a role model for other young women who might see aviation as a field only for men.

“One of the things she’s expressed to me is she wants young girls to see they can do this,” said Tiffany. “It’s not something just for men. She always thought she’d have to be stewardess to get to travel, only males were pilots.”

Sydney said that while piloting is currently a male dominated industry, with only 4.6 percent of the licensed pilots out there being female, with programs like the one at GCI, and women with the passion to become pilots, like herself, those numbers can change.

“That’s a low number for women in aviation,” she said. “I’m glad to be breaking through on that and I hope to get more women involved.”

“The program opened my eyes to see that you could get your private pilot’s license if you worked toward it,” aid Sydney. “This is something I can realistically do, and I think most people don’t know that. Getting young people to realize this is a career anyone can work toward – they’re going to need a lot of pilots in the next 10 years.”

Sydney, who is also on the Davison Varsity Swim Team, said she is currently looking into colleges and financial aid, like most high school seniors.

She said she would love to attend Embry-Riddle Aeronautical University in Daytona Beach, Florida. The school, she said, is considered among the best aviation schools in the United States.

“You live, eat, sleep and breathe aviation at that college,” said Sydney. “You’re surrounded by it because everyone on campus does something related to aviation.”

Sydney said she is also looking at Eastern and Western Michigan universities, Utah Valley State and Ohio State – all of which have aviation programs.

She said she is going to go the college path, so she has some sort of backup in case piloting doesn’t work out.

That “backup” will be a bachelor’s degree in aviation management, which Sydney calls the “boring side” of aviation but is still related to the field she is determined to be a part of.

Allard said the program is doing well and has been successful in offering students a career path many have not considered pursuing.

“We’re proud of the program,” she said.

Sydney said she hopes more kids go into the program and that it grows with more school participating.

“Flying is absolutely amazing, and I suggest anyone under the age of 18 call Young Eagles and go up on a flight. It’s 15 minutes that could change your entire life,” she said. “It’s one of the best things you could go into, an amazing opportunity to get a flight in and see what it is truly like to be in the air.”