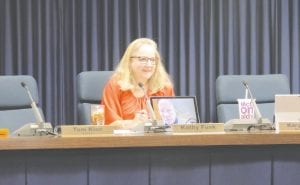 A tablet computer set up in front of Township Clerk Kathy Funk shows Trustee Tom Klee attending the township board meeting via Skype.

FLINT TWP. — In a first for the township board meeting, one physically absent trustee attended via Skype — a computer app service that enables virtual two-way communication such as face-to-face personal chats or business conference calls. But the technological innovation did not go over well.

Trustee Tom Klee, via Skype, apologized for not being able to be physically present at the meeting due to a previous engagement set up since February, he said. He noted that the conflict arose because of the July board meetings being moved from the first and third Monday to the second and fourth Monday, due to the Fourth of July holiday.

Trustee Frank Kasle raised the question about board policy to allow a Skype attendance. He recommended forming a subcommittee to determine future board procedure for virtual attendance.

Township Supervisor Karyn Miller said that, according to the township attorney, there is no current law prohibiting a Skype attendance but the board could vote on whether to allow Klee to attend that way. A computer tablet linked to Klee was set up near his empty chair enabling him to see, hear and participate in the meeting. Kasle said he appreciated the attorney’s advice but still thought the board ought to set up a committee to make a recommendation on what circumstances count as attendance, other than being physically present.

Miller, who also sits on the Bishop Airport Board, said a similar issue arose there and the attorney, which also is the township’s attorney, came up with some bylaws that she could obtain for the township board to review. Miller asked if any other board members objected to Klee attending via Skype.

Treasurer Lisa Anderson said she understood that the change in board meeting dates this month created the conflict for Klee and based on that she did not object.

Kasle said he did not object to Klee’s Skype attendance but did not think the township attorney should decide board policy. Trustee Barb Vert agreed.

Ultimately the board voted unanimously to allow Klee to participate in the meeting via Skype.

However, some residents voiced their objection during public comment.

Gerald Roberts, a township board meeting regular, said that trustees are paid to attend meetings and should not accept payment if not attending meeting.

“We have a trustee that has missed numerous meetings for whatever reason,” Roberts said. “People of this township elect trustees to be here.” He noted that emergencies such as a death in the family is an acceptable excuse but other outside commitments should not take precedence over attending board meeting. He drew applause from the audience when he said “the person who is not here tonight” has missed quite a few meetings and should attend or resign.

“I know that technology is the wave of the future but I hope this trustee (Skype attendance) is a one and only occurrence,” he said. “I would hate to come to a meeting and have to sit and watch you all by computer because you are at a remote site.”

Seaward added that by his work ethic, there are two excuses for not coming to work – one being contagiously ill and or hospitalized and the other having a death in the immediate family.

“Beyond that I don’t think it is too much to expect you to be here physically,” he said adding that important votes were coming up that needed input from all trustees.

“I hope this is the one and only time and we won’t see it again,” he concluded to a smattering of applause from the audience.

Supervisor Miller noted that Klee tried to return his check but the township is not legally allowed to accept it. He can however donate it and the funds will be added to the general fund. She said that trustee is paid about $6368 per year in a lump sum and must pay payroll taxes on that.

It was noted that Klee, who is a Carman-Ainsworth business teacher and widely respected announcer at Cavalier sporting events, will be in attendance as a volunteer emcee for the upcoming National Night Out event at the police station.