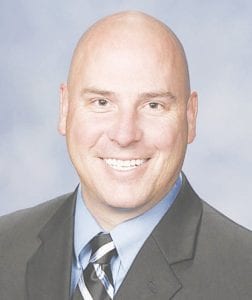 Slezak, 53, a 1985 graduate of Davison High School and 1989 graduate of Yale University, is running as a Republican for the supervisor’s seat.

Elkins, a Democrat, currently holds the seat since he was appointed to serve out the remainder of the term remaining for retired supervisor Karen Miller, who left the office in September of 2018.

Slezak served in the Michigan State House of Representatives in 2009-2010 and he’s been on the Davison Downtown Development Authority for the past five years.

He said he’s lived in the township for about 24 years, having grown up in the City of Davison. He is part owner in the Photo Factory, is a real estate agent with Allstate Properties and is the varsity baseball coach for Davison High School. His wife, Kathleen, owns the Dance Connection, 225 Shopper’s Alley in Davison.

The couple has three children, Bridgette, Gabbie and Jack.

In addition to his political and business experience, Slezak said he is also a volunteer with Outreach and in the school district, as well as being a member of the Knight of Columbus.

Slezak said his experience at the State House of Representatives is one of the reasons he chose to run for supervisor. Another reason is he’d like to see some practices at the township changed.

“One of the things is I believe people should be elected to office and not appointed,” he said. “People want to have a choice. And I believe with my previous experience in office I would be the best choice in Davison Township.”

Slezak said he’s excited to bring all three Davison municipalities closer together. He said he also thinks his experience in Lansing as a state representative, dealing with big budgets, would allow him to bring that skill set to aid the township.

Also, moving forward beyond the current COVID-19 threat, Slezak said he is prepared to make the necessary changes at the township offices that will be necessary to conduct business in the “new normal.”

“There are a lot of protocols that have to change, and I can do that,” said Slezak. “I’d also like for the meetings to be more audience friendly. Negative or positive, I want to hear from the residents.”