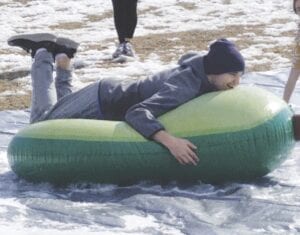 Luke Clapp, who serves as the manager for the Dragon wrestling team, was beaming as he hit the slope at Elms Park to take part in the Polar Plunge fundraiser for Special Olympics. Photo by Lania Rocha

With temperatures hovering just below 50 degrees – a welcome departure from the subfreezing temperatures of the previous week – about 60 people hit the slip-and-slide on the sledding hill to raise money for Special Olympics Michigan on Saturday, Feb. 27.

Most slipped and slid several times, despite feeling the sting of the frigid air and water provided by the Swartz Creek Area Fire Department.

“We are still raising money … but so far, we have raised $2,952 all going to Special Olympics Michigan,” said event organizer Samantha Pirker-Fruehauf.

Noah Kalakay was one of the participants who helped raise the money.

“I liked what the cause was,” Kalakay said of his reason for joining in the fun.

He also enjoyed the thrill of sliding down the hill.

“My least favorite part was how cold my feet were,” he said, echoing the sentiment of many.

Although the COVID-19 pandemic put a crimp in the usual Polar Plunge plans, supporters were not deterred. All across the state, people put on their thinking caps and came up with creative, alternative fundraisers.

“Our organization has a budget of $8 million to $9 million, so the Polar Plunge is far and away the largest fundraising event we have that is extremely crucial to making sure we can provide all of our programming for our athletes,” he said.

“So, when we realized we had to switch gears and come up with a new game plan, because we knew getting large groups of people together was not the best idea, we had to put it on our participants to find ways to get cold and raise money for our athletes.”

With that, Special Olympics Michigan lowered their fundraising expectations, and set a $500,000 goal for 2021.

“We weren’t sure how it would go because, in the past year, everyone has thrown the word ‘virtual’ in front of everything and expected it to work,” Mills said. “It was a brand new concept, and we knew it would probably take a while for people to figure out what the heck a virtual Polar Plunge is.”

It took a while to pick up momentum, but when it did, it did it in a big way.

“We far exceeded our initial goal,” said Mills. “As of (Monday afternoon), we had hit $675,000, which is mind-boggling. We didn’t expect that kind of support.”

The alternative events have spanned the gamut. People have slid down slides into kiddie pools, had water balloon fights, and jumped into cattle watering troughs.

“It’s been fun seeing people take ownership and put their own spin on things,” said Mills. “People really seemed to have so much fun with it. If we are able to return to the traditional Polar Plunges in 2022, I wouldn’t be surprised if people ask to have some sort of virtual component to it. We saw a lot of first-timers this year, people who maybe didn’t want to jump into a frozen pond or pool.”

“I’m so happy with how it all turned out,” she said. “I loved seeing the community come together like that.”

Mills said Michigan leads the nation in the number of people who participate in Polar Plunges, which take place in more than 30 locations statewide every year.