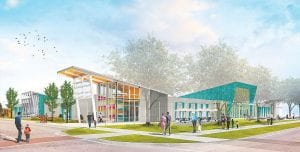 The Sloan Museum held a groundbreaking ceremony to announce their plans for expansion and renovation. The new and improved facility will reopen in 2021 and will officially be known as the Sloan Museum of Discovery. Renderings Provided

FLINT — Sloan Museum held a groundbreaking ceremony yesterday afternoon in celebration of its expansion and renovation project, which will transform the destination into what will officially be known as the Sloan Museum of Discovery, set to open in 2021. Major donors and supporters shared details about new and reimagined exhibits and expanded community programming.

“This project is something that we’ve actually been working on for almost three years,” said Sloan Longway Executive Director Todd Slisher. “When we first sat down and took a look at the museum, we realized there were a couple major issues. One was that the museum was built primarily for adults, yet the audience that was using it was more youthbased. It was school groups, parents with kids, grandparents with kids, and we felt we wanted to make a change and try to suit the audience a little better. Not that we won’t have exhibits for adults. We will.

“Also, the exhibits at the Sloan Museum have gotten kind of old, kind of tired,” Slisher continued. “They’ve been there for 20 to 25 years and they were done in an old, artifact-text-label-style, which kids don’t learn well from. They learn better with hands-on, experiential exhibits. So, we wanted to implement those. And we’re also changing some structural issues and styles, too.” 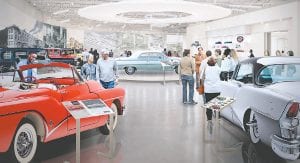 The Sloan Museum of Discovery will boast new classrooms and galleries, including a brand-new 10,000-square-foot automotive gallery, which will feature all of the cars previously showcased in the museum’s Buick Gallery, along with some new additions.

What is now known as the Alfred P. Sloan Museum will reopen in approximately two years as the Sloan Museum of Discovery. The new building will boast an addition of approximately 42,000 more square feet added onto its current 52,000 square feet of existing space. The new space will offer much higher ceilings, as well as new classrooms and galleries, including an early childhood gallery, science gallery, history gallery and an automotive gallery. During construction, the museum has moved many of its exhibits to the Courtland Center Mall, where they will remain through 2021.

“Structural changes were needed, in order to accommodate new exhibits, but also our mission needed some updating, as well,” said Slisher. “That’s why we’re going with the new name – the Sloan Museum of Discovery. We’re changing that deliberately because we want people to discover new things about science, history and technology.”

Funding for the massive project is being provided by the C.S. Mott Foundation, General Motors, Alfred P. Sloan Foundation, the Hagerman Foundation and the Community Foundation of Greater Flint, among many others.

“It’s important for people to understand that the funding for this project is all private donations, and some money from the State of Michigan, as well. But none of the arts and culture millage is being used for this,” said Slisher. “Millage money is only used for operational expenses, not for capital projects like this.”

Together with partner organization Longway Planetarium, Sloan Museum inspires youth, families and patrons to discover, explore and value science, technology and history through engaging learning experiences. Sloan Museum is a member organization of the Flint Cultural Center Corporation and is supported in part by the C.S. Mott Foundation, Michigan Council for Arts and Cultural Affairs (MCACA) and the National Endowment for the Arts (NEA). Sloan Museum is funded in part by the Genesee County Arts Education and Cultural Enrichment Millage. For more information, visit their website at www.sloanlongway.org or follow Sloan Museum on Facebook and Instagram @SloanMuseum.