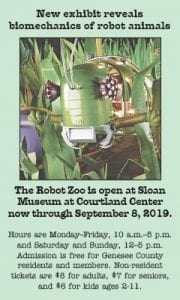 BURTON — Sloan Museum visitors can explore the biomechanics of complex animal robots to discover how real animals work at the newest traveling exhibit, The Robot Zoo.

The 5,000-square-foot exhibit reveals the magic of nature as a master engineer. Eight robot animals and more than a dozen hands-on activities illustrate fascinating real-life characteristics, such as how a chameleon changes colors, how a giant squid propels itself, and how a fly walks on the ceiling.

The larger-than-life-size animated robots include a chameleon, a rhinoceros, a giant squid with 18-foot tentacles, and a platypus. Also featured are a house fly with a 10-foot wingspread, a grasshopper, a bat, and a giraffe.

Hands-on activities include “Swat the Fly,” a test of the visitor’s reaction time (one-twelfth as fast as a house fly’s), and “Sticky Feet,” where visitors can see what it’s like to be a fly on the wall. Triggering the “Tongue Gun” demonstrates how a real chameleon shoots out its long, stickytipped tongue to reel in a meal.

Animation in the robots imitates real-life behaviors. The robot chameleon rocks back and forth as it turns its head, looks around and fires its tongue at its insect prey. The front legs of the platypus swim in breaststroke style while the tail moves up and down. The tentacles of the giant squid grip a struggling fish, while the squid’s beak-like mouth opens to reveal a spinning food grinder. — G.G.