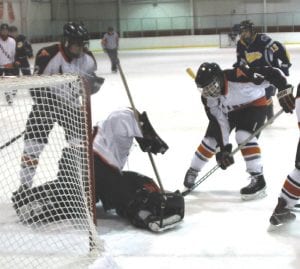 Jeff Fisher (#7) looks to create some offense for the Carman-Ainsworth/Flushing varsity hockey squad during a recent contest.

FLINT TOWNSHIP — The Carman- Ainsworth/Flushing Hockey team suffered a tough loss at the hands of Saginaw Swan Valley on Saturday, 7-5.

Jordy Makranyi opened the scoring in the first period, assisted by Mickey Montpas and Michael Livingston. Drew Sanborn would tally for the Raiders in the second period with a helper from Montpas.

After that, the Raiders would fall into a quick deficit, as Swan Valley scored an eyepopping seven goals in the second period to take a substantial lead, 7-2. Goaltender Casey Bradshaw was pulled following the third Swan Valley goal, and was replaced by Chad Bundy, who surrendered four goals of his own.

Bradshaw returned to the net to open the third period, and helped spark a desperate comeback attempt. Sanborn lit the lamp again with an assist from Makranyi, followed by an unassisted goal from Montpas. Montpas would later pick up an assist on a Gavin Williams goal, but it was too little, too late for the Raiders, falling, 7-5.

“It was very frustrating because the first period was probably the best period that we played as a team all year. Followed by the second period, which was the worst period of hockey we’ve played in two years,” said coach John Jepson. “When you give up a touchdown in a period, usually you’re not going to win those games.”

“Third period, we came back and played well, and made it a game at the end, but obviously, the gap was way too large,” continued Jepson. “Usually when you win two periods, you should be able to win the game, but not in this case.”