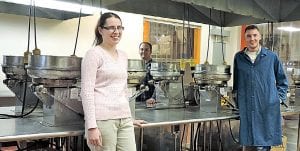 Staff at Jonny Almond Nut Co. are shown here in the cooking room with 18 cookers used to prepare the candy-coated nut treats.

It spent the next 20 years enticing more and more customers with the delectable aroma of roasting candy-coated nuts wafting down the aisles.

That simple pleasure sadly ended last month when Jonny Almond closed its mall retail outlet for good. But unlike many businesses closing their doors lately, Jonny Almond left because it is thriving.

“We have been concentrating on wholesale since … 2007 and that business has been growing so much it has become much more profitable than retail,’’ said Alicia Handlin, general manager of the company headquarters at 4254 Fenton Road.

The business’ growth is going nuts. It moved into its headquarters in 2007 when it outgrew the mall kiosk.

After five short years, they needed more room and in 2012 added 2,000 square-feet to the existing 3,000-square-foot building that houses the corporate offices and production facility.

They’ve outgrown that too and are planning to add another 2,500 to 3,000 square feet in an expansion this spring, Handlin said.

They looked around for a bigger building before deciding to stay put and addon, she said, noting that they hope the next expansion will serve for another five to 10 years.

Jonny Almond has quietly grown from a mall kiosk business into a multi-million dollar company selling its products in all but a few of the 50 states.

“We don’t see it slowing down at all, we’ve got a lot of good leads,” she said.

One big boost is a pending SQF food safety and quality certification that will allow them to sell to large grocery stores like Meijers and Walmart.

With SQF certification they can take on private label packaging in addition to the Jonny Almond brand.

She anticipates more hiring as new companies come aboard and will be accepting applications this spring from anyone interested in working there.

Jonny Almond now comes in 13 flavors and four nuts. Besides almonds, there are peanuts, cashews and pecans covered in flavors including cinnamon, honey and spicy buffalo.

The basic recipe has not changed much since its German origins circa 1898, said Bobby Esckelson, office manager and graphic designer.