FLINT TWP. — A small plane crashed at Bishop Airport around 9:30 a.m. today after it was diverted to Bishop Airport with a malfunctioning engine.
Four men onboard the plane, reportedly from St, Petersburg, Florida where the flight originated, walked away from the crash scene and were taken to Hurley Medical Center in Flint, according to Christopher Miller, director of public safety for Bishop International Airport.
Miller said the airport was notified at 9:30 a.m. there was an aircraft on approach that was reporting it had lost power to one of its engines. The plane was flying to Wisconsin from Florida, taking the four men on board possibly to a business meeting.
Bishop Airport gave the plane permission to land on runway 18. During landing the plane ran off the runway and flipped over onto the grass.
Miller said there were no major injuries and all four walked away from the wrecked plane. The plane is described as an Avanti twin-engine. It will remain where it is on the Bishop runway until investigators from the Federal Aviation Administration and the National Transportation Safety Board can arrive and investigate later today.
Further details about the crash or the men on board the plane were unavailable. 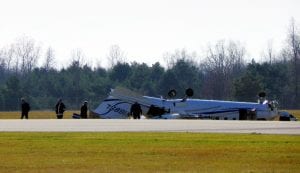