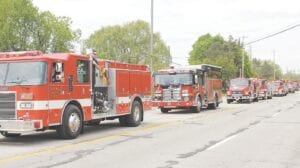 A look back at a previous Burton Memorial Day celebration. File photo

BURTON — Plans for an in-person and virtual Memorial Day 5K walk/run are moving ahead, but some officials are urging reconsideration with COVID-19 numbers on the rise.

City Councilman Vaughn Smith reported to the council on April 19 that plans for the annual Memorial Day 5K race have limited the number of participants to 300 participants and it will be held outdoors starting in the parking lot of Atherton High School.

“It is the same course as past years,” said Smith, referring to the Genesee Road to Atherton Road, to Coin Street and back route. “Runners must wear masks when starting. Once you’re out on the course you can take your mask off. It would be difficult for some runners, especially older ones, to run with a mask on.”

Smith also thanked the administration for allowing the use of money out of a $10,000 fund of donations to pay for port-a-potties at the course. He also said the committee organizing the race had to purchase medals, which are currently on order to arrive in time for the race.

The race, he said, will be a staggered start and it will be a chip-timed race – which means a chip carried by each runner starts timing as soon as they cross the pad at the starting line. The chip will then log each runners time from start to finish to determine the winners.

Smith said the 2021 race will also have a few other changes.

“When you come back through, in the old days we’d have food and all other kinds of stuff,” he said. “Whatever will be handed out this year will be in a brown paper bag or plastic bag and (the runners take it and) just keep on going.”

He said people are “so starved to do stuff” that the committee has 3,000 responses to a social media post they put up about the race with people inquiring about partipating.

“They are all excited and looking forward to it,” said Smith. “But we want to make sure they’re safe. We’re making it as COVID secure as possible.”

Council President Steve Heffner said he thinks the city needs to take the planned Memorial Day race, parade and ceremony one step at a time and be very careful.

He said because Michigan has been designated as an epicenter of the pandemic in the U.S. right now, city officials need to be very careful they don’t put residents in danger by hosting something that could potentially get people sick.

“So, we really, really need to pay attention to what the governor, and doctors and scientists are saying. If it were to be held this weekend or next weekend, I’d say we should cancel it,” said Heffner. “I don’t know what’s going to change in the next month. But if it was held right now, I wouldn’t attend.”

Heffner suggested the council take a close look at what they are planning for Memorial Day and decide if it is going to be safe enough for such a gathering on May 31.

“Because there are going to potentially be a lot of people who show up here and we could get people sick,” he said. “That’s something we need to keep in the backs of our heads.”

Heffner urged the council consider the meaning behind Memorial Day, which is the honor those who have given their lives to protect the lives of American civilians.

“Memorial Day is to honor the lives of the people who died to protect us,” he said. “So, I can’t think of a better way of honoring them than to keep that going by protecting our residents. We need to also try to protect them. We need to think long and hard about this Memorial Day and just see what’s going on.”

The Memorial Day festivities in Burton will be held May 31, starting the 5K race at approximately 8:30 a.m. in the parking lot of Atherton High School. To register for the race visit www.runburton.com.