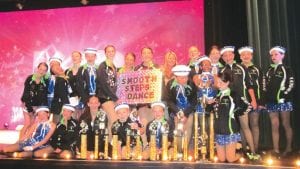 It was a very tough competition with girls from all over the USA and Canada. The girls were very excited and had to qualify at a Regional competition held in Grand Rapids in April. They received also a top first and first in the Hip Hop Category. Getting the first place National win meant their score had to beat all the scores, in the tap, jazz hiphop and lyrical categories

The girls had a very exciting season this year receiving overalls in over 75 percent of the numbers they entered. They also received many special awards including full scholarships to dance Camps in New York and Chicago.

In the award category this season the dancers were given several Double Platinums the highest score possible.