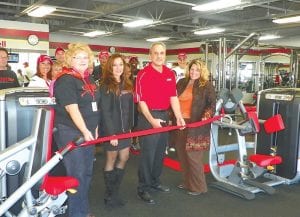 When the previous operator moved out in August, George Zerka, who owns the strip mall where it is located, said he began making plans to reopen the gym.

“It was a very busy gym,’’ said Zerka, who now owns the 3,750 square-foot gym with his brother Joseph.

“I think the area needs a fitness place,’’ Zerka said, during an October 11 ribbon cutting.

Zerka, who also runs a convenience store in the plaza, said it is his first fitness center but he hopes to open another one in the township if this one is successful.

A staff of five have scheduled work hours. But the premise of Snap Fitness centers is that they are open around-the-clock. Members receive a swipe card key to gain access to the building at their convenience.

The gym is the first in the state to have Octane Lateral cross-circuit machines, said personal trainer Melanie Vaughn. It also has state-ofart Matrix exercise machines.