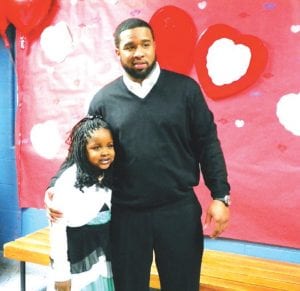 FLINT TWP. — One of the first special occasions in a young girl’s life is when she gets all dressed up for a special date with her dad.

So it should come as no surprise that last Friday’s hefty dumping of snow closed schools earlier in the day but could not keep away hundreds of Carman-Ainsworth students who attended the sixth annual Daddy/daughter Mother/son dance at Rankin Elementary School.

To manage crowd size, the dance is held over two nights. Students from C-A’s Dye and Randels elementary schools and their parents attended the snow-capped Friday night event.

Roads were probably in better shape for the Saturday night event held for students and parents from Rankin and Dillon elementary schools.

About 400 people were expected the first night and 350 the second night, said Debbie Borgerding, a parent who works with Da Peeps Carman- Ainsworth F.T.C. Robotics teams which sponsored the fundraising event. 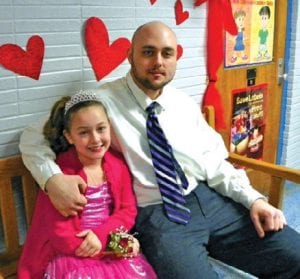 Joe Gamache and Gabrielle Gleeson, 8, at the Daddy/Daughter, Mother/Son dance.

“It helps them pay for their robot parts,’’ Borgerding said, adding that all robotic tournaments are held out of state so funds also are needed for travel.

Most of the people attending were daddy/daughter couples because little girls tend to get more excited about the dress-up occasion, Borgerding said. But there were mothers and sons present too.

The gym and hallways were decked out with a Valentine’s Day theme. Punch and cookies were served and a deejay provided the music.

A professional photographer also was on hand to provide a memento of the special dance.