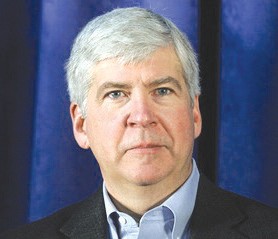 LANSING — Gov. Rick Snyder today thanked Flint-area members of the Michigan Credit Union League for donating $50,000 worth of gift cards to residents who have been working with the state and federal government to monitor lead levels in the water in their homes.

Flint residents who will receive the cards live in sentinel sites, locations throughout Flint designated for testing by the Michigan Department of Environmental Quality and the Environmental Protection Agency. Water collected from these sites will be continually tested in order to gather data to measure the safety of the water and determine when it is suitable for consumption.

“The state is working with the EPA and independent water quality experts to restore safe drinking water to the city of Flint as soon as possible,” Gov. Snyder said. “I greatly appreciate the generosity of the credit unions in providing this thank you to residents who have been integral in the testing process.”

Water collected from these approximately 600 sites is continually tested in order to gather scientific data to measure the safety of the water overall and decide when it is suitable for consumption. Site data collection started on Feb. 10 and will wrap up in mid-April. Test results are reported online each week, and residents also receive a hard copy of the results.

Each sentinel team visiting homes includes a member of the DEQ, a licensed plumber and a community member. The teams demonstrated to residents how to draw water samples using a scientifically accurate method so residents could submit regular samples for testing.

The gift cards will be distributed at the end of the home water testing period in mid-April to residents who turn in all five samples required by the program. Donating credit unions include: