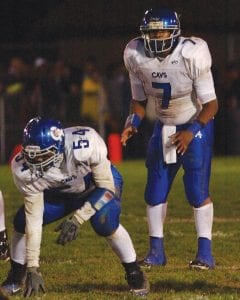 DAVISON
— There are two ways to look at Carman-Ainsworth’s football season this year:

One, the Cavaliers (3- 5) will finish below .500 no matter what they do in their season finale this Friday at Novi.

Two, they were six points away from sweeping Big Nine champion Davison.

Carman-Ainsworth lost its second twopoint decision to the Cardinals in four weeks last Friday, 22- 20, at Davison. On Sept. 24 at home, the score was 18-16.

Amid the frustration of the narrow defeats is the promise of a brighter future.

“We’re still making a few mistakes that aren’t allowing us to get over that hump,” said Cavs coach Nate Williams. “But we’re young, and if we can continue to get better and stronger this off-season, we have a chance to do some good things over the next few years.”

The Cavs again hurt themselves with penalties — eight for 80 yards — but still had a chance to win in the final minute. Shane Barron’s 32- yard touchdown run out of the Wildcat formation and Connor Storm’s extra point pulled Carman- Ainsworth within 22-20 with 44 seconds left. But Davison recovered the onside kick and ran out the clock.

The Cavs fell behind, 12-0, in the first quarter on a 16-yard touchdown run by Davison quarterback Jake Thompson and a 10-yard score by Brandon Cooper.

But they surged ahead, 13-12, in the second quarter. Allen Overton scored on a 12-yard run, with Storm kicking the extra point, and Gerald Holmes put them ahead with a 4-yard touchdown run.

Davison regained the lead before halftime on a 24-yard Mike Dolloff field goal that made it 15-13. The Cardinals stretched it to 22-13 in the third quarter on Thompson’s 3-yard touchdown run and Dolloff’s PAT.

Carman-Ainsworth stalled on a couple of drives in the second half, but Barron turned in another spectacular play in a season full of them to give the Cavs a chance at the end.

Holmes led a balanced ground attack with 56 yards on 12 carries, while Overton gained 40 on 11 carries and Robert Young carried seven times for 36 yards. Overton hit 8-of- 28 passes for 97 yards. The Cavaliers totaled 230 yards but gave up 305 to Davison.

“We’re going in the right direction,” said Williams. “This was a young group, and we’re just trying to get them to understand how we have to play, which is a very unselfish way and being committed to the team. The young people have bought into it, and if we get a few more guys with the attitude of these guys, we’ll do fine.”