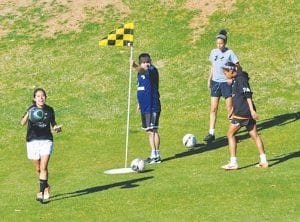 FootGolf is played using a soccer ball, but with the rules of golf.

MIDLAND — A fairly new sport, which is a combination of soccer and golf— better known as FootGolf— is continuing to grow and amass popularity across the country. Billy Casper Golf, which owns and operates several golf courses throughout the country, hosted a kickoff event on Saturday, July 12, from 9 a.m.-6 p.m. in Midland.

FootGolf is a four-person game and is open to everyone.

Midland Mayor Maureen Donker was a part of the festivities to help kickoff the new sport in the area as Currie Municipal Golf Course is now set up with a nine-hole course, each one having its own par. The object of the game is just like golf, only in this instance you must drop the ball into a 21-inch wide cup.

“Billy Casper Golf has a history of thinking outside the box and we are ecstatic to introduce FootGolf to Currie Municipal Golf Courses,” Paul Milholland, General Manager of Currie Municipal stated in a press release.

FootGolf at Currie Municipal will be accessible to the public during weekdays from dawn to dusk. On that schedule it will cost $4 for those 18-and-under and $6 for any one 19-and-up. Soccer balls will be on hand for rental.

The course is located just outside of downtown Midland and also features a 27-hole golf course with a par-3 course and a driving range. It is made up of 6,493 yards and is a par 72. Part of the property runs along the Tittabawassee River, which makes for some beautiful sightlines.

While none of our local courses have created a FootGolf course as of yet, it’s expected to gain popularity much like the hybrid disc golf did a few years back. County Parks created disc golf courses, including several in neighboring Genesee County. FootGolf will take place only on golf courses, though, as the sport is geared more toward golf following the rules and attire of golf. Soccer attire is discouraged according to the official rules of the Federation for International FootGolf. Rules are a revised version of the first FootGolf World Cup Rules played in Budapest, Hungary in June 2012. Each of the 17 member countries had input into the rules.

Just as in traditional golf, water and sand hazards, penalties, handicaps, stroke and match play and teeing grounds are part of the game. The main goal of FootGolf is to get a ball – the circumference of which is not less than 68 cm and not more than 70 cm, and at the beginning of the match its weight is not more than 450 g and not less than 410 g – with the lowest possible number of kicks from the flat area marked as the place for the teeing ground into a hole placed in at least a 50 meter area and with a diameter of 50 – 53 cm and depth of 30-40 cm. The player is responsible for ensuring that he/she has a proper knowledge of the rules of the game and for the proper interpretation and use of definitions and expressions used in Golf and FootGolf.