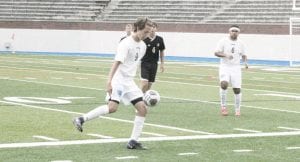 Carman-Ainsworth’s Keenan Shukairy takes control of the ball against Corunna on Aug. 18. Photo by Brandon Pope

Etienne Moral scored an unassisted goal to put the Cavaliers on the board with 16 minutes remaining in the first half. Tommy Taylor added the second goal just eight minutes later, assisted by Moral. The Cavaliers held a 2-0 lead at halftime before Davison tried to mount a comeback. Davison’s only goal of the game came seven minutes into the second half off the toe of Matthew McDonald. Darwin Bostwick recorded the win in net for Carman-Ainsworth.

“We dominated play, but just couldn’t find the back of the net,” said Davison coach Rob Nuckolls after the loss.

Carman-Ainsworth moved on to face Lapeer in the semifinal round yesterday. Lapeer had received a firstround bye. The winner will play either Grand Blanc or Flushing. Grand Blanc eliminated Swartz Creek 4-0 on Monday, while Flushing knocked Flint out with an 8-0 win.

The final two teams will play for the bragging rights and the district title on Friday at 6 p.m. at Flushing.