Soccer team bows out in opening round 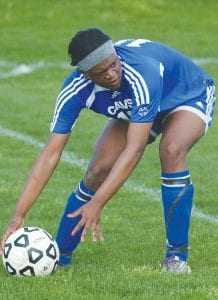 GRAND BLANC — The Carman- Ainsworth soccer team knew it was up against a more superior team when it took the field in the opening round of districts on Tuesday. The Lady Cavs would not back down and tried to play its game, but Saginaw Heritage was too skilled and won the game, 9-1.

Heritage would score six goals in the first half to only one for Carman and Heritage led 6-1 at the half. Three second half goals gave Heriatge the mercyrule win.

Destiny Wallace earned the win for Heritage in net making one save. Sara O’Conner and Taylor Schwellenbach led Heritage with two goals each while Isabella Leblanc, Karen Timm, Kirsten Catloth, Sam Bierlein and Carlie Allen tallied one goal each. Assists were made by Maggie Morris and Catloth.

Last Wednesday, the Lady Cavs hosted Ortonville-Brandon and came away with a 0-0 draw. Neither team could break through the others defense to put one in the back of the net.