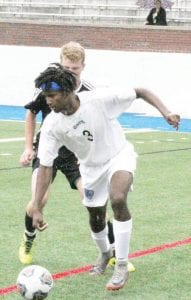 Carman-Ainsworth’s Tommy Taylor takes control of the ball against Corunna on Aug 17. Photo by Brandon Pope

The Cavaliers tied Clio 3-3 last Wednesday. Omar Abdalla found the net twice and Hill scored once. Carman-Ainsworth is 4-0-1 to start the season. The Cavaliers were at Bay City Central on Wednesday following press deadlines and will host Flushing today. – K.R.