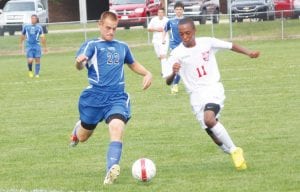 Carman-Ainsworth’s Ryan Macko sprints with the ball under heavy pressure.

FLINT — In a non-conference game at cross-county rival Kearsley on Tuesday, the Cavs came out ahead 6-2. It was Yahya Abdelhay that opened the scoring for Carman-Ainsworth at the 25th and 18th minutes on assists from Leon Bell and Derrald Boggan, respectively.

Now up 2-1 after halftime, Uthman Shukairy was next to connect for the Cavs on a penalty kick before Austin Yost made it a 4-2 game unassisted. Bell then scored with help from goalie Tyler Springer and Charles Cantrell rounded out the offense on a pass from Jason Haynes.

On Aug. 27 the Cavs lost to Flint Metro League rival Fenton 4-2 at home after going into halftime up 2-1. Bell scored the first goal of the game for Carman-Ainsworth on the pass from Quinton Pincomb and Ahmad Alzahabi put his team up by a goal on a first-half penalty kick.