Soccer team will be very young 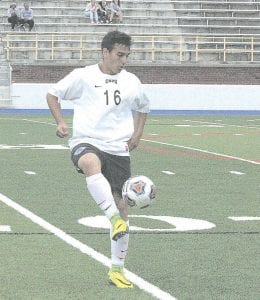 Carman-Ainsworth’s Mohamed Farhan (16) is one of six players returning to the team this season.

FLINT TWP. – The Carman-Ainsworth boys’ soccer team graduated 14 out of 21 players off last year’s roster. Goalie Spencer Fiweg, forward Yazeed Abdelhay and defenders Lucas Shoffer and Zack Lloyd were among those who graduated.

Returning for Carman-Ainsworth this season will be Ryan Farrar and Keenan Shukairy at midfield, defenders Jacob Yost and Mohamed Farhan and forwards Wallace Hill and Tommy Taylor. The Cavaliers have also added midfielders Omar Abdalla and Jack Carter, as well as freshmen Jordyn Stearns, Isaiah Tunstall and Caran McIntosh.

“We are a very young team with only three seniors and graduating 14 from last year, but the experience from most of the players playing club will hopefully offset the youth,” said Carman-Ainsworth coach Jay Witham, who is in his 11th season at head coach. “The league will be from top to bottom. There will be a definite learning curve.”