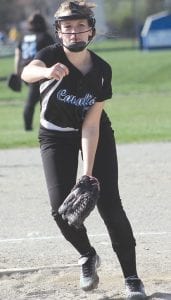 FLINT TWP. — Carman- Ainsworth fell to Durand, 15-0 and 11- 1, in a non-league softball doubleheader Tuesday at home.

The Cavaliers didn’t hit the ball well in the opener but fared a little better in the nightcap. Jessica Smith and Samantha Johnston both went 2-for-2, and Korbin Brandon had a double, which scored their only run.

Carman-Ainsworth was on the winning end of a Saginaw Valley League twinbill last Thursday, sweeping Flint Northwestern, 25-7, 18-2, at home. Jennie Klapko, Brandon and Smith each had three hits in the opener, while Jessica McClung and Meghan Borgerding lashed two apiece. Dannie Crowder had a double and Elizabeth Roe contributed a single to the attack. Aided by walks and errors, the Cavs scored 11 runs in the first inning and 10 in the second. The game ended via the mercy rule after three innings, with Madison Cox picking up the win in the circle.

Borgerding had a triple to highlight the second game, while Klapko, Brandon and McClung also had multiple hits.

The Cavs will host Flint Southwestern on Monday.