Softball districts to be tough for Cavaliers 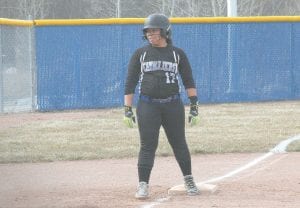 Carman-Ainsworth’s Jada Black stands on third base at Kearsley on March 26.

SAGINAW – The Carman- Ainsworth softball program (0-10) embarks on the postseason next week in a district with a few strong teams. Also there is Flushing (1-11 Flint Metro League), Saginaw Arthur Hill (0-2), Swartz Creek (13-1 Metro) and host Saginaw Heritage (3-16). None of the teams are currently ranked.

Carman-Ainsworth will open up on Tuesday at 4:30 p.m. at Flushing. The winner advances to take on Arthur Hill at 10 a.m. on Saturday while Swartz Creek and Heritage battle at noon. The winners of those matchups will play in the district championship game at 2 p.m. All of Saturday’s games will be held at Heritage.