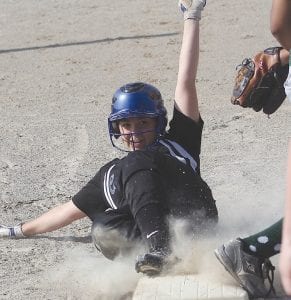 Meghan Borgerding slides into third base during a May 2 game.

FLUSHING — Carman-Ainsworth faces a stiff challenge in the Div. 1 softball districts next week at Flushing High.

The Cavs are 7-18 at this writing, having swept the three Flint city schools and picking up another win over Mayville in the LakeVille Invitational last Saturday. They’ve also come close to beating Davison and Powers Catholic.

The district champion will move on to a regional semifinal game June 8 at Saginaw Heritage against the winner of the Brandon district.