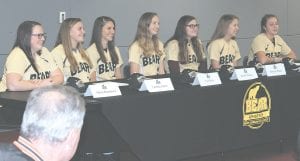 FLINT — Seven high school seniors signed their letters-of -itent to play college softball at Mott Community College in a ceremony held at the Events Center on the Mott campus on Wednesday, Nov. 1.

Two additional athletes from the Class of 2018 could not be present at the gathering. The nine players represent a mixture of local talent along with some athletes from around the state.

“We believe this is a strong recruiting group, not only athletically, but academically,” commented Mott women’s coach, Rod Studaker, whose teams have won three league crowns, two regional championships, one state title and made two trips to the Sweet 16 Nationals during his six years at Mott. “We have been Academic All American for three straight years and this incoming group carries almost all A’s in the classroom. So, we are very proud of the quality of student athletes that are here now and of those who will also be joining us next fall.”

Olivia Dunsmore is a pitcher at Kearsley and she will be pursuing a career in nursing. Olivia says that Mott’s strong program in nursing had a lot to do with her decision to attend Mott.

Tabitha Elliott is an outfielder at Owosso. She plans to pursue a career in nursing and says she “liked the vibe I got from the coach and it fit my ideology as a player, so I am very excited for my future at Mott.” Tabitha was First Team All-Conference as a junior at Owosso and she was All-Academic last year, also.

Tori Hyde is a catcher who can also play most other positions. She was All- District and Genesee Area Conference honorable mention as a junior at Corunna. She says she plans to become a physical therapist and that being close to home played a role in her decision to sign with Mott.

Rachel Mackey is a pitcher and infielder at Swartz Creek and she plans to study psychology at Mott. As a junior, Rachel was First Team All-Flint Metro, All-District and All-Region as a pitcher. She set the school record last year for most innings pitched in a season and she earned the Flint Metro League Scholar award. “I like the small campus and I wanted to stay close to home,” Rachel commented.

Kierstyn Muma is a pitcher and first baseman at Grand Blanc. She plans to go into sports medicine and says she is excited to play at Mott because “it is close to home, the campus is nice and the softball program is good.” Kierstyn was Michigan High School Athletic Association All-Academic as a junior and she is a member of the National Honor Society at Grand Blanc.

Emily Stambaugh is a pitcher and infielder at Goodrich. She is going into education. Emily was Second Team All- GAC and First Team All-District as a sophomore and as a junior at Goodrich. “This is a great opportunity because I love the coaches at Mott and it is close to home,” says Emily.

Nicole Sieler is a pitcher and first baseman at Monroe High School. She is undecided in her career choice at the time, but says she chose Mott because it seemed like the right fit. She says she liked the coaches and the atmosphere when she visited campus. Nicole is on the honor roll and is a member of the National Honor Society. She was First Team All-District and First Team All- Region as a junior.

Adri Nelson is an All-State catcher from Shepherd. She plans to become a state trooper and will study criminal