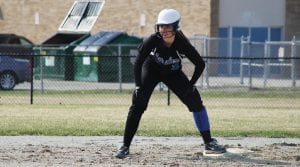 Brianna Haskins stands on base for Carman- Ainsworth.

The Cavaliers broke through for their first wins of season in a big way Monday, routing Flint Southwestern Academy, 21-2 and 12-3, in a Saginaw Valley League- South Division doubleheader at Southwestern. Madison Cox won the opener, striking out 11 while allowing just three hits and one walk. Jessica McClung won the second game, allowing five hits and striking out five.

Last Thursday, Carman- Ainsworth dropped a pair of SVLSouth games to Flushing, 12-6 and 18-0. Koegel had four hits, and Jessica Smith had three, including a double, and drove in a run.

Tuesday’s non-league twin bill against Holly was canceled by wet conditions. The Cavs will host Flint Northwestern in another SVL-South doubleheader today. — D.N.