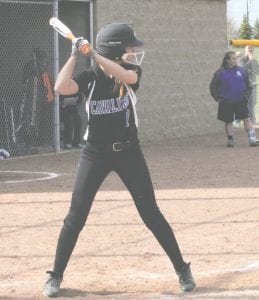 Carman-Ainsworth’s Alexis Ritchie awaits the pitch during an Apr. 17 game at Lapeer.

DAVISON – The Carman- Ainsworth softball team traveled to Davison on Monday and took a pair of losses to their Saginaw Valley League rivals, 18-3 and 16-3. The first game ended after just three innings with all three of the Cavs’ runs coming in the final frame. They also racked up three hits.

The nightcap took five innings and began as a competitive game, tied 3-3 after the first inning. The tone changed after that, though, as Davison scored four runs in the second, three in the third and six in the fourth. Carman-Ainsworth added five hits in the game.

The Lady Cavs went up to Midland last Thursday and lost both Saginaw Valley League duals, 15-0. Morgan Sherrer was the defensive catalyst in the opener, not allowing a single ball to touch the grass in centerfield. The nightcap saw a similar performance from Makala McDaniels, who was able to corral everything that came into left field. – B.P.