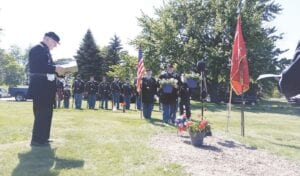 The Sons of Union Veterans of the Civil War gathered at Crestwood Cemetery on Sunday to honor their fallen brother one more time. Photo by Lania Rocha

GRAND BLANC TWP. — Jentery M. Farmer had a passion for history and, in particular, the Civil War.

Even as a high school student, he enjoyed dressing up in the woolen uniform of a Union soldier and participating in re-enactments with his brethren in the Sons of Union Veterans of the Civil War.

“I always thought it was remarkable that he wanted to spend his summers doing that,” said Farmer’s mother, Stephanie Lipa Skinner.

On Sunday, May 30, the SUVCW and Farmer’s family joined together for a graveside memorial service.

Farmer, 27, died April 24 of natural causes. He was well-known throughout the Flint area and, in particular, Swartz Creek, where he served on the city council, park board, Hometown Days Committee and more.

The formal service at Crestwood Cemetery included a rifle salute and “Taps.” Farmer’s final resting place was decorated with his re-enactment rifle, boots, hat and canteen, the SUVCW flag, and red, white and blue flowers. 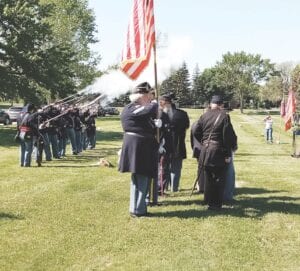 The service included a rifle salute, prayers and “Taps.” Photo by Lania Rocha

“This is how we honor a brother, in the manner any solder should or would have been,” said SUVCW member Lloyd Lamphere. “Jentery was special. I was very impressed with him. He was quiet, but very dependable. He was determined … an inspiration.”

“He was a good man,” said Andrew Dolio, who performed “Taps” at the ceremony. “No matter where he was or what he was doing, he always had a smile on his face and he made sure everyone else did, too.”

Decoration Day, the predecessor of Memorial Day, was designated at May 30, a day to decorate the graves of Civil War soldiers from both sides.

After World War I, people across the country began honoring those lost in all American wars and, in 1971, Congress declared Memorial Day a national holiday to be recognized on the last Monday in May.