Packed with new technologies such as available Android Auto, Apple CarPlay and new active safety features, as well as a more spacious interior and an athletic, aerodynamically optimized design, the 2016 Cruze elevates the compact car segment – from San Francisco to Shanghai and from Boston to Buenos Aires.

It will be offered in more than 40 global markets and goes on sale first in North America in early 2016. A new, standard 1.4L turbocharged engine with direct injection and an SAE-certified 153 horsepower helps enable a General Motors-estimated 40 mpg on the highway with the available six-speed automatic transmission. Stop/start technology helps enhance the Cruze’s efficiency in stop-and-go driving.

“The 2016 Cruze builds on a very successful program that introduced Chevrolet to new customers the world over,” said Alan Batey, president, General Motors North America. “We retained all the attributes that made the original Cruze a hit around the globe and built on them to make this car more sophisticated, more fun and more Chevrolet.” 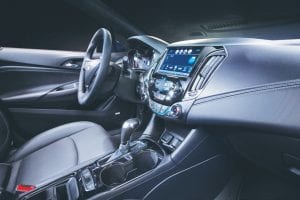 With greater spaciousness and technology, the 2016 Cruze’s interior is designed to be more comfortable and a better connected environment for the driver and passengers.

Proportionally, the new Cruze is 2.7 inches longer and nearly an inch shorter in height than the current model, giving it a longer and leaner appearance. A faster windshield rake and a faster-sloping rear profile lend a sportier look to the design, while the rear profile culminates in a standard integral rear spoiler that contributes to the car’s aero efficiency.

“With styling influenced by the acclaimed 2014 Impala and all new Malibu, the 2016 Cruze brings Chevrolet’s new, expressive global design language to the small car segment,” said John Cafaro, executive director, Chevrolet Design. “The Cruze’s approach to proportion and premium details adds to Chevrolet’s elevation of craftsmanship, content, quality and a fresh interpretation of an identity that is unmistakably Chevrolet in every market around the world.” 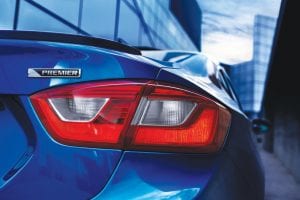 Through smartphone integration, Cruze’s all-new Chevrolet MyLink infotainment system provides simple and intuitive use of smartphones in the vehicle. It integrates certain phone functions onto the Cruze’s seven-inch-diagonal color touchscreen, allowing them to call up music, navigation apps and more. An uplevel MyLink radio with an eight-inch display and navigation is available and also incorporates Apple CarPlay.

Apple CarPlay takes the iPhone features owners want to access while driving and puts them on the vehicle’s display in a smart, simple manner. This allows drivers to make calls, send and receive messages and listen to music right from the touchscreen or by voice via Siri. Apple CarPlay-supported apps include Phone, Messages, Maps, Music and compatible third-party apps. 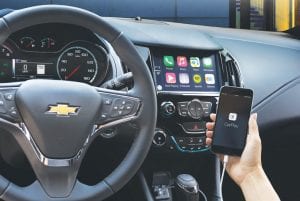 Android Auto is built around Google Maps, Google Now and the ability to talk to Google, as well as a growing audio and messaging app ecosystem that includes WhatsApp, Skype, Google Play Music, Spotify and podcast players.