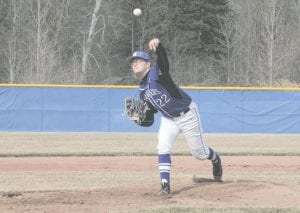 Carman-Ainsworth’s Chase Matusik goes to the plate against Kearsley on March 26. Photo by Brandon Pope

Pitcher Chase Matusik represented Carman- Ainsworth on the mound for the South.

The South team led 2-1 after four innings before the South grabbed a 4-1 lead in the fifth. The North then tied the game 5-5 in the sixth. The game remained tied until the bottom of the eighth when the South grabbed the lead for good as the North made a throwing error, allowing the South to add two extra runs. – K.R./J.O.