Southern hospitality is a nice change of pace 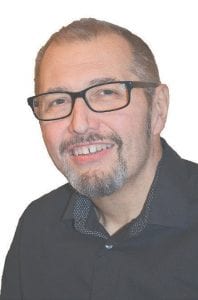 When I left on vacation to Gulf Shores, Alabama two weeks ago, I was looking forward to some warm weather, sunshine and a relaxing getaway. I’m happy to say I found all of that, but I also discovered what people mean when they talk about ‘southern hospitality.’

We noticed the change in atmosphere not long into our first day in Gulf Shores. Walking along the beach, the wind blowing in off the Gulf of Mexico, we began to encounter people out walking like we were – but there was something different happening here.

People were smiling. They were looking up from the ground, making eye contact with us and saying ‘hello.’ It was a bit of a surprise at first for those of us unaccustomed to being greeted by strangers while walking in public.

This friendliness was apparently contagious, as Anita began to greet the people we passed on the beach with an amiable “hi” or “hello!” I gave her a nudge and leaned over to say, “if you’re going to do it, you have to get it right – it’s ‘how y’all doin’?”

I know it probably seems odd that I found the hospitality of people down South to be so unusual, but we Michiganders aren’t always the nicest bunch. Don’t get me wrong, there are many nice people here in Michigan, but many of us don’t show it when we’re out an about.

Some of us tend to be uptight, grouchy and even downright rude. People here often walk around looking down at the ground, we grumble a lot and we don’t always acknowledge each other in a warm, friendly manner.

In Alabama it wasn’t just a couple people; it was nearly everyone we came across. These were happy, kind, courteous people who were doing the unthinkable for a Michigander – they were being nice.

I’ve heard stories about how nice people are in the South, but in my few travels to that region of the country I haven’t experienced it like I did in Alabama. There were friendly people everywhere we went. At the restaurants the waitstaff was pleasant and extremely accommodating. In the shops they were very helpful, we experienced no one with road rage and even when we attended a Mardi Gras parade, we interacted with some children who responded to us by saying “yes ma’am” and “no, sir.”

So why are people in the South so much friendlier than here in Michigan, and even in other places throughout the United States? Personally, I think a large part of it is tradition and upbringing.

In the long-run I don’t know if Southerners are just outwardly nice, their friendliness mostly for show, or if they’re genuinely that friendly – but I found it to be a nice change of pace. Certainly something we could learn from here in our little corner of the world.

Gary Gould is the managing editor of the View Newspapers. Contact him at 810-452-2650 or email him at ggould@mihomepaper.com.