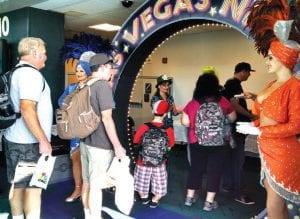 Las Vegas showgirls flew in for a party at Bishop International Airport to launch direct service to the popular gambling and resort destination.

In keeping with the theme, other festive touches at the airport included a photo booth were passengers could take photos with the showgirls, a buffet, a cake, a radio remote and Vegasy trinkets.

Passengers entered the jet-bridge through a Las Vegas-themed arch to board the sold-out 10:50 a.m. non-stop flight.

Now it its 42nd year of service, Dallas-based Southwest Airlines is in the process of introducing new flight routes from Flint after taking over AirTran Airlines which has flown out of Bishop since 1997. 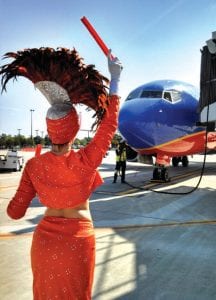 Southwest operate nearly 3,400 flights a day and serve communities around 85 airports in a network of domestic destinations.

Bishop International Airport offers the lowest average airfares in the state, according to a press release. For reservations and flight information from Flint, visit its web site at bishopairport.org.