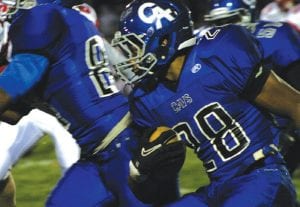 FLINT TWP. — Carman-Ainsworth couldn’t beat the same team twice this year and saw its best football season in over a decade come to a premature end last Friday with a 30-26 loss to Grand Blanc.

The Cavaliers had won their season opener at Grand Blanc, 27-12, on Aug. 24, but couldn’t repeat the feat in a Div. 1 first-round playoff game at home. Carman-Ainsworth, ranked as high as No. 3 in the state this season, finished 8-2, its best winning percentage since the 1999 team went 10-1. Grand Blanc, 6-4, advanced to play at Clarkston, 10- 0, tomorrow night.

The Cavs had a good chance to win it at the end, with first-and-goal at the Grand Blanc nine-yard line in the last two minutes. But they couldn’t score in four plays, the last an incomplete pass in the corner of the end zone.

Carman-Ainsworth scored in the first quarter on a 29-yard run by Malik Seales but trailed, 9-6, at the end of the period.

Gerald Holmes ran 80 yards for a touchdown in the second quarter, but Grand Blanc again took a 16-13 lead into halftime.

Brandon Walker returned an interception 44 yards for a touchdown in the third quarter, but Grand Blanc took the lead for good, 30-20, with two touchdowns in the period.

The Cavs pulled within 30-26 with 3:49 left in the game when Connor Storms hit Walker with a 32-yard touchdown pass. Carman-Ainsworth then got the onside kick and drove to the nine but couldn’t get in the end zone.

The loss overshadowed a 205-yard rushing night on 21 carries by Gerald Holmes. Malik Seales added 109 yards on 15 carries, as Carman-Ainsworth rolled up 314 yards on the ground. Storms added 47 passing yards for a total offense of 361 yards.

Grand Blanc topped that with 448 total yards, including 364 through the air. Bart Williams was 21-of-40 passing, including three touchdown tosses.

Antwon Curtis led Carman-Ainsworth with five tackles. Seales and Walker each had four tackles and an interception.