Special needs BAM! boy gets Batmobile thanks to Home Depot 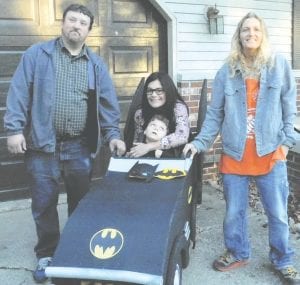 Natasha Steele, center, just wanted a cardboard box from Home Depot, to piece together a Batmobile to go over son Keegan’s wheelchair. But Home Depot associates Jason Dixon, left, and Angela Withem, right, came to the rescue, and built “a pretty sweet Batmobile” just in time for Halloween.

FLINT TOWNSHIP — A special little boy who is fond of superheroes has a couple of his own superheroes who helped make his Halloween extra special.

Keegan Steele is a 5-year-old boy with wide eyes full of wonder, an infectious smile and a thick crop of blond hair. Born 10 weeks early, Keegan has cerebral palsy and a host of other medical conditions that limit his mobility. As a result, he uses a wheelchair.

“Keegan has always been a Marvel superhero fan,” said his mom, Natasha Steele, a Flint Township resident and Swartz Creek graduate. “This year, for Halloween, I told him he couldn’t be Captain America again, and he wasn’t happy. So, I sprung some of the Justice League on him. I tried Superman and got nothing. I even tried Spiderman, and I got no reaction. But when I said Batman, he lit up.”

Steele decided that her little Batman would need a Batmobile, so she set about to procure a cardboard box big enough to piece together a contraption that would fit over Keegan’s wheelchair.

She called Home Depot in Flushing, to see if they would set aside a box, but the associate who answered the phone said store policy requires that they crush all of their boxes.

“My first thought was, ‘I’m going to build a Batmobile,’” she said.

“I went into the store and Angela came up with a tape measure all ready to go,” said Steele. “She said she really wanted to take the reins.”

Withem and coworker Jason Dixon built the Batmobile out of Styrofoam boards and a lot of paint and glue. They even hooked it up with lights.

“We told our manager what we wanted to do, and he didn’t question it; he said, ‘Whatever you need …,’” Withem said. “Home Depot makes it super easy to do stuff like this, to make an emotional connection with the community.”

“Angela said she had a project, and we talked about ideas,” said Dixon. “We didn’t have a pattern. We just looked online, Googled some images and ran with it. We love doing this kind of stuff.”

Withem said community service is part of the workplace culture at Home Depot. Their value wheel – which includes things like giving back, doing the right thing, and building strong relationships – is imprinted on their shirts and aprons.

“Projects like this fit right in with our values,” said Withem. “They encourage us to do things like this.”

And those outreach projects provide immeasurable rewards, she said.

“Keegan smile and my heart melted,” she said of the moment she and Dixon unveiled the Batmobile. “I’ve been floating on a cloud ever since.”

“I just needed a box, and we ended up with a pretty sweet Batmobile,” said Steele. “When I saw what they came up with, I cried. I didn’t know what to say. It’s been very overwhelming for both of us.”

Keegan and his mom, who dressed as the Caped Crusader’s trusty sidekick, Robin, made the rounds of trunk-or-treat events over the weekend.

Keegan’s story appeared on a couple of local news broadcasts, and was picked up by media outlets throughout the Midwest.

But now, as the whirlwind subsides, Steele is packing up clothes and food, and saying lots of prayers as she and Keegan prepare for another surgery.

Steele said she’s thankful for her family and friends who have helped her through 12 other surgeries to date, and she’s looking ahead to Christmas.