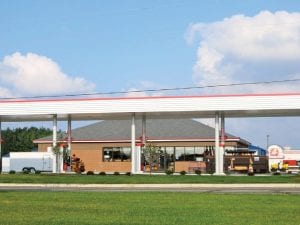 Finishing touches were being done on the rebuilt Speedway store and gas station at Linden and Corunna Road in preparation for a September 10 reopening, after being closed for three months.

The station has been closed since early June for a three-month demolition and rebuild that is typical of Speedway’s prototype remodels of its area locations.

The new 3,900 square-foot Linden Road store will be open 24 hours. It will have 16 consumer fueling positions located only on the west side of the building, unlike the old building that also had south side pumps.

The store will feature an expanded selection of quality hot and cold beverages as well as prepared food products including pizza, breakfast sandwiches, hot lunch sandwiches, subs and cookies. The store also will be selling beer products available in a walk-in beer cave.

Anyone interested in working at the store can apply online at jobs.speedway.com, Griffith said.