Spencers Theatre of Illusion Live at the Whiting 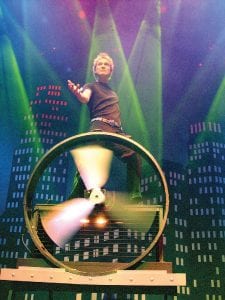 Kevin Spencer of Spencers Theatre of Illusion, which will be performing live at the Whiting in Flint, Feb. 18.

FLINT — Named Performing Arts Entertainers of the Year for six consecutive years, The Whiting is pleased to present Spencers Theatre of Illusion on Feb. 18 at 7:30 p.m.

Plus join the Whiting for its Magical Journey’s Package. This all-inclusive package includes a family fun-filled evening with a visit to Sloan Museum’s Discovering Dinosaurs Exhibit, pizza dinner, and a ticket to Spencers Theatre of Illusion. Complete package details are at www.thewhiting.com.

Magic is no longer about baffling the audience by doing something seemingly impossible. We’ve seen it all before. Magic these days is about spectacle, drama, danger, and personality. Kevin and Cindy Spencer are the masters of this new magic theatre.

The Spencers have been named Performing Arts Entertainers of the Year for a staggering six consecutive years. And, recently, their peers named them International Magicians of the Year joining the ranks of Henning, Copperfield, Penn & Teller, and Criss Angel. Illusions presented in today’s performance are selected from an extensive repertoire of magical mysteries perfected by The Spencers. Prepare to be mystified!

The Spencers tour with one of the largest theatrical illusion shows in the nation.And they are some of the most respected artists in their field.

Spencer is the co-founder of Healing of Magic and the author of the Hocus Focus curriculum for special education students.