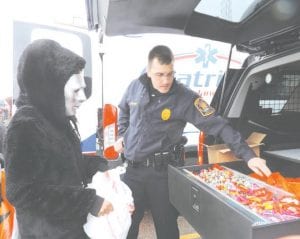 SPOOKTACULAR TURNOUT – Despite a spurt of rain and temperatures in the mid-40s, thousands of children and adults lined up for the first-ever Genesee County 911 First Responder Trunk-or-Treat event, hosted by the Michigan State Police on Corunna Road. Fire, police and EMTs from several jurisdictions around the county including Flint Township were on hand to help pass out candy and meet and greet the trick-or-treaters. A long line stretched from the entrance to the MSP post, north on Lincor Parkway to Corunna Road, west on Corunna Road all the way down to the driveway next to Rite-Aid then south about halfway through Lincor Park shopping plaza, behind the police post. Amy Belanger, community service trooper and event coordinator, guesstimated that 3-4000 people turned out for what is hoped to become an annual safe, fun event for families. 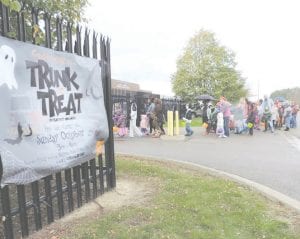