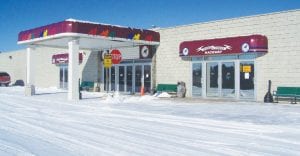 Sports Creek Raceway is closing its doors after 29 years of harness racing in Swartz Creek.

SWARTZ CREEK – Sports Creek Raceway is closed, the land and buildings are for sale, its fixtures are being parted out and its food supply is being donated to a local food pantry.

“The only way there will be a race track here again is if someone comes in and buys it and runs it as a race track,” said Chris Locking, general manager. “But I don’t see that happening.”

The order, which halted all live racing, simulcasting and wagering effective Jan. 1, came after track owners and members of the Michigan Harness Horsemen’s Association failed to agree on a new contract.

MHHA Executive Director Phil Stommen said the hitch in contract negotiations was the supplemental compensation that the horsemen pay the track.

By law, track operators and horsemen must split the commissions earned on wagers. Venues receive 60 percent of revenues, while 40 percent goes to prize purses. 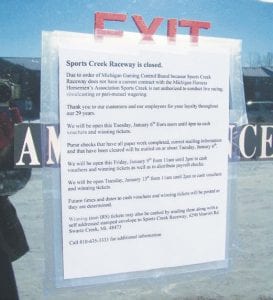 A sign posted on a door at Sports Creek Raceway thanks customers and workers for 29 years of loyalty, and designates times and days when bettors may redeem winning tickets.

“Recently, the race track operators demanded that the horsemen pay them a portion of the revenue designated for purses,” Stommen said in an email.

“We offered Sports Creek $8,000 per day – the same deal accepted by Northville Downs in August – to help supplement their operations, but they are demanding a much bigger share of the horsemen’s purse money.”

Locking said the MHHA’s offer was “less than half” the contract the MHHA proposed in a failed attempt to resurrect the Jackson Harness Raceway.

Sports Creek proposed a 6-month extension of the previous contract, to allow the business climate time to rebound and to see if any new legislation would come along, Locking said.

Locking said that putting Sports Creek on a par with Northville “wasn’t going to solve our problems here.”

He said Sports Creek needs more help than Northville, which does more business.

Stommen agreed that Northville is more solvent. Since Sports Creek generates fewer revenues for purses, “it doesn’t make financial sense to offer them more than $8,000 per day,” Stommen said.

“Both the race track operators and Michigan’s horsemen are struggling, but we can’t solve all of the race track’s financial problems on the backs of the horsemen,” he said.

Both men blamed changes in the gaming industry for signaling the death knell for harness racing.

Sports Creek Raceway must arrange for bettors to redeem any unpaid winning pari-mutuel wagering tickets issued at the track by March 2.