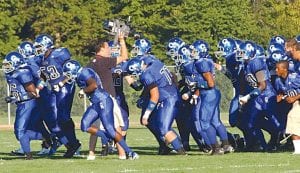 EAST LANSING — For the first time in eight years, participation in high school sports in which post-season tournaments are sponsored by the Michigan High School Athletic Association dropped below the 300,000 mark during the 2011-12 school year, but the decrease was still slower than the drop in the general student population at member schools.

Student enrollments at MHSAA member schools were down by 3.7 percent for the past school year. Girls participation was down 1.2 percent from a year ago with 124,724; and the boys total of 172,593 was down 1.7 percent.

Since 2006-07, the student population at MHSAA member schools is down from 531,903 to 487,651 — a drop of 8.2 percent. Participation in that time span has dropped from 313,093, a decrease of 5.0 percent. The totals count students once for each sport in which he or she participates, meaning students who are multiple-sport athletes are counted more than once.

Records for participation in 2011-12 were set in four sports — two for boys and two for girls. Once again, cross country and lacrosse numbers hit alltime highs in both genders.

Also of note in this year’s survey:

• Only two sports exhibited a drop in participation that was well beyond that of the drop in student enrollment. Boys golf was down 6.6 percent, and boys swimming and diving was down 4.7 percent.

• Boys tennis continues a downward slide, with this year’s participation of 6,815 the lowest point since the MHSAA began tracking the numbers in 1991-92. Its losses since 2006-07 are the highest in terms of percentage of any sport at 21.5 percent (1,868 participants). By comparison, girls tennis participation is stable, up 0.6 percent in the same time period.

• Basketball figures dropped 1.9 percent for boys and girls in 2011-12, also continuing a decline faster than the drop in student enrollments, and participation in both sports are at their lowest points since the MHSAA began tracking the numbers in 1991-92. Since the 2006-07 survey, girls’ participation is down 10.9 percent and the boys’ number is down 8.8 percent, the second highest drops in raw numbers of all sports. Girls are down 2,100 partici- pants, boys 2,131.

• A total of nine sports have participation dropping at a faster rate since 2006-07 than enrollment numbers would suggest — boys tennis, girls swimming and diving, boys and girls basketball, boys and girls skiing, girls gymnastics, softball, and girls track and field.

The participation figures are gathered annually from MHSAA member schools to submit to the National Federation of State High School Associations for compiling its national participation survey. Results of the Michigan survey from the 2000-01 school year to the present may be viewed at www.mhsaa.com and clicking on Schools, Administrators, Sports Participation.