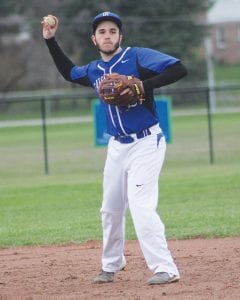 Austin Yost returns to the diamond for Carman-Ainsworth.

After winning the 2014 conference title with a record of 17-17 overall, 8-2 Saginaw Valley League-South in head coach Steve Faculak’s initial season with the team, expectations are optimistic for the Cavs in 2015. That doesn’t mean this squad isn’t facing some very specific challenges, though, mainly because it lost 10 players to graduation.

“Some big losses for us will be graduates Brennen Gleason, a four-year varsity pitcher and third baseman, and Andrew Ramirez a run producer from left field,” said Faculak. “Connor Storms will be greatly missed as he was our leader on the field and strongest producer at the plate.”

Stepping up to fill those voids includes the team’s only returning seniors Austin Yost, a starting pitcher who suffered through a wealth of injury issues last year, and starting right fielder Leon Bell. Outfielder Spencer Fiewig, who was the only freshman on the team last season after being brought up from the junior varsity, will look to make his mark this year. 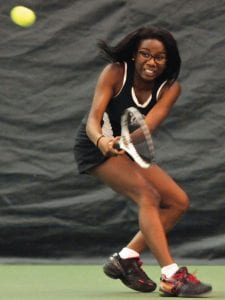 J’Lynn Corder plays at No. 1 singles for the Cavaliers.

“Our returning players are sophomores Austin Jerome and Jawanza Edwards who earned All-League First Team honors. They’ll be playing second base and shortstop respectively,” Faculak said. “Austin Yost is our best bat this year, along with Leon Bell. Junior Cooper Betancourt saw limited time last year behind the plate, but will be there full time this year. He’s also expected to compete for the No. 1 pitcher.”

Newcomers are twin brothers Ray and Ryan Macko at first and third base because of their experience in travel ball and ability to pitch out of the bullpen. Left fielder Jacob Wilkos also looks to make his mark this season after showing some true potential both at the plate and on the field during spring training.

“Our team focus has always been good pitching and defense. Our offense comes from our defense. We come to rely on it,” said Faculak. “I think this year you will see an even greater shift to close games. From the returning players, I will be looking for greater run production at the plate with runners in scoring position and two-strike scenarios.”

As for the teams to beat in the SVL-South this year, Faculak sees Powers and Lapeer as serious title contenders and feels much will be decided early in conference play. One factor that changes this equation is the retirement of longtime Davison head coach Timm Rye .

“It is tough to say as they all are very difficult to beat. The coaching experience and program depth has made many of the squads contenders each year,” Faculak said. “Powers and Davison always present a roadblock to the title, however, we will all be curious to see what Lapeer brings to the league. It will be a real challenge and whoever wins will not do so without a few lumps on the way.” — M.S.

Haywood Petty returns as the Cavaliers’ No. 1 golfer for the fourth straight year, looking to break through in his final high school season. The senior has come within seven strokes of reaching the Div. 1 regional the last two years.

Junior Noah Vanderhyde also played on last year’s district tournament team, but the experience level is slim after that. Tyson Fields did play some varsity last year as a freshman and is back for his sophomore campaign.

The rest of the starting lineup so far consists of freshmen Jalen Stewart and Kaden Rytlewski, but both have experience playing in the Flint Junior Golf Association.

“They’re young, and early in the year I think they’re going to be a little tight,” said coach Bob Blaylock. “But I’m optimistic. Haywood should be strong, and I think we’re going to be a step up from last year.”

The Cavaliers will play a non-league match at Owosso on Monday. – D.N.

The Cavaliers lost three players to graduation off an 0-8 squad last season. Carman-Ainsworth has a total of seven players returning to this year’s squad.

The Lady Cavaliers are looking to bounce back from a tough season a year ago after going 2-3 within the Saginaw Valley League-South and 3-12 overall. The way their season ended wasn’t easy, either, as they fell to Swartz Creek during a torrential downpour that engulfed the playing surface.

“(I expect) improvement,” said coach Jessyca Mathews. “They have learned from the mistakes of the previous years and have learned that as a team. They must be committed and focused. They understand that mistakes will happen, but the point is to learn and improve. The more we do this, the better everything will be in the long run.

“Big picture is key and loving the game is our purpose.”

Carman-Ainsworth, however, only lost a couple of players in the offseason, mainly center/midfielder Alexis Thurber and defender/goalkeeper Rachel Roop. Returning to the 2015 roster will be defender Alexis House, Melody Bamford returns after a year off from the team and Ariana Valentine will be the mainstay between the pipes.

To bolster that talent, the Cavaliers have picked up a few new faces, as well, with senior forward Jessica Bontamasi, freshman midfielder Brittany Young and Denmark native Therese Clauen Brock at midfield.

After a bit of a rebuilding season a year ago, the Lady Cavs appear to be reloaded and ready to take the next step for their program. Losing four key seniors is never easy, but Carman-Ainsworth looks to be an improved team on the diamond.

“Last year was a learning season,” said coach Joy Roe. “We had four seniors leave us last year. Among them were two outfielders, a shortstop and a pitcher. They were all leaders in some way and contributed to the team not only on the field, but in everyday life. They are sorely missed.”

On the upside, third baseman and pitcher Kristin Hawk transferred back to Carman-Ainsworth and will be in the lineup this season. Returning to this year’s roster are shortstop Jessica Smith, second baseman Brianna Haskins, first baseman Korbin Brandon, third baseman Sarah Thurston, outfielder Haley Fyfe, and pitcher Madison Cox.

“We have three freshman, two sophomores, five juniors and five seniors,” added Roe. “We have more speed, harder hitters, and more determination this year than some previous years. Based on what has happened so far this season, we are in for some real nail biters.” — B.P.

The girls’ tennis program at Carman- Ainsworth is thriving, with 13 players on the varsity and at least that many on the junior varsity. Many of them are young and new to the game, but there is enough returning experience to make the Cavs competitive again.

“We have a lot of new players,” said coach Bob Chunn. “Even on my varsity, I’ve got ladies who have had very little playing experience, but we’re working hard to get them up to speed. I’ve seen big improvement in their strokes, and I’m looking forward to getting the season started.”

Five varsity players are back, led by third-year No. 1 Singles standout J’Lynn Corder, a junior who was the Saginaw Valley League South Division’s Most Valuable Player last year.

“She’s a club player, and that makes all the difference,” said Chunn. “She plays year-round, takes lessons and plays competitive tennis. If you’re going to be the best in our league, that’s what you have to do.”

Briaunna Hughes, who played No. 3 doubles last year, is probably going to move to No. 2 Singles based on initial playoffs. The Nos. 3 and 4 Singles positions were up for grabs, although Rida Khan played No. 4 in the regional last year.

The No. 1 Doubles spot is pretty well set with last year’s No. 2 team of Meagan Speaks and Dorothy Dollinger moving up to the top flight. The rest of the doubles positions were being contested among new varsity players.

Carman-Ainsworth will visit Clio for a non-league match Monday. – D.N.

The Cavaliers are loaded with returning All-State sprinters who powered their relay teams and helped them to top-five finishes in the Div. 1 state finals the last two years.

Kahlil Johnson, Amir Jackson and Terrell White are strong in the hurdles, and senior Tyler Pangerl is the distance specialist, coming off an All-State indoor season and likely to be in the 1:56 range in the 800.

Devonte Johnson was an All-State pole vaulter who has already gone over 13 feet this spring. Juwan Willis is a potential 6-foot, 5-inch high jumper, and Minor has gone over 22 feet indoors and 21 feet outdoors in the long jump.

“We picked up a couple of basketball guys who are really good jumpers, too,” said coach Kenn Domerese. “Once we get going, we could be pretty good in the jumps.”

The Cavs also have Kahlil Johnson back in the shot put and discus, and Ruffin won the shot at the Kearsley Early Bird Relays.

“This is only our second day outdoors,” Domerese said at that April 1 event. “We’ve been in the hallways all winter, so we might be the fastest hallway team in the state.

“We think we’ll be a top-five team again in the state,” he added. “We’re two-time defending Saginaw Valley League champs, and we don’t plan on giving that up.”

Girls’ coach Dave Thrash is in a similar situation, seeing what his team can do outside after weeks of 60-meter dashes in the hallways. He has 19-20 freshmen on a 40-member squad that includes several talented veterans.

Harmany Williams, Italia Daniels, Jazmine Randle and Aleah Mixon are just some of the runners back on the relays and sprints. Williams, Rayven McCree, Laura Depew and Brandi Brown are strong in the hurdles, and Randle has topped 30 feet in the shot put. Diamond Scales is in the pole vault.

The Cavaliers will visit Bay City Central on Tuesday. – D.N.