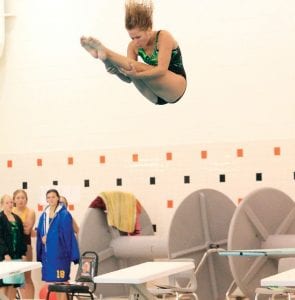 Carman-Ainsworth’s Jennifer Messina spotted the water as she rotated through a dive earlier this season at Fenton.

Tyler Pangerl clocked 18:56 to take 42nd place and lead the Cavaliers at the Kayla O’Mara Invitational last Saturday at Goodrich. Ahmir Dunn was five spots behind him in 23:40. Cassandra Pelkey led the Lady Cavs in 25:33, followed by Dhjream Carter in 27:21. James Johnson placed 12th in 17:48 in a Big Nine Conference meet Oct. 12 at Flushing Township Park. All four league teams were there. The Carman girls’ team bowed to Davison, 15-50. — D.N. 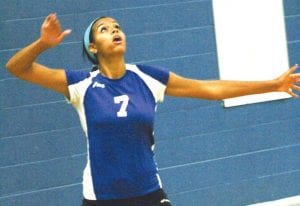 Senior Kamrin Gold gets ready to serve the ball for the Carman-Ainsworth varsity volleyball team during a recent contest.