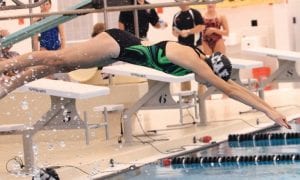 A member of the Lady Cavs’ swim team entered the water during a relay race.

With Kaitlin McNally and Bailey Birnie out of the lineup, Davison still was able to step up and knock down Carman-Ainsworth, 116-68, last Thursday. The difference for the Lady Cardinals was 11 first-place showings in 12 events.

In the diving, Davison finished second and fifth. For the Lady Cavaliers, Andrea Bade was third in the 200 free at 2:32.6, Allia Howard placed second in the 200 IM at 2:53.49 and taking the runners-up spot in the 50 free with a time of 28.97 was Courtney Glinka. The diving was Carman- Ainsworth’s strongest category, as Jennifer Messina and Kassidy Lord finisehd first and third, Rebecca Hrit swam a 1:23.32 in the 100 fly to take third, and in the 100 free Mara Johnson was second at 1:05.95 and Ashleigh King was fourth in 1:08.54.

Hrit also competed in the 500 free for the Lady Cavaliers and placed second in 6:32.3, in the 200 free relay Jacinda Kitts, Katie Wilson, Selena Vargas and Glinka finished second. In the 100 breaststroke Johnson was second at 1:27.85 and Bade was third in 1:33.21. With Glinka grabbing the fourth position for Carman-Ainsworth in the 100 backstroke at 1:28.11, coming in second in the 400 free relay was Johnson, Glinka, Andrea Bade and Howard, and placing third was Bade, Kitts, King and Hrit.